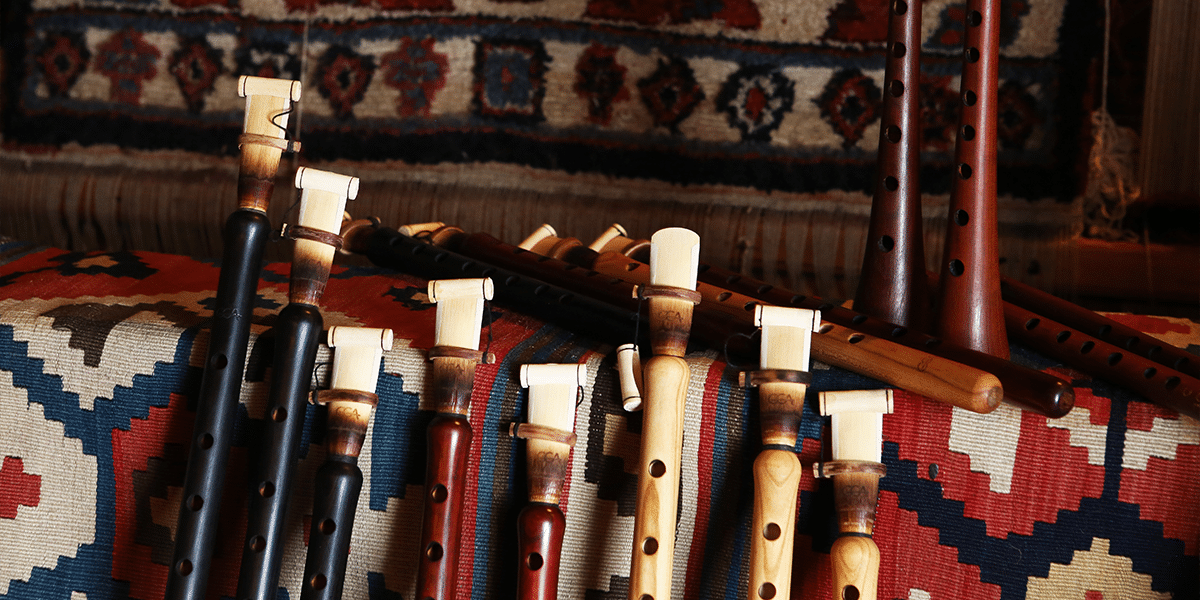 No other musical instrument is able to convey the emotions of the Armenian people so honestly and eloquently as the duduk, Born in the early eons of Armenian history, it is purely Armenian. Because of its evocative and colorful timbre and warm sound, the duduk has become part of everyday life in Armenia. Today, no festive occasion, wedding reception or family feast is complete without a dudukist.

The duduk is a form of oboe hand-made almost always of apricot wood, with a 1,500-year history behind it. The duduk is strictly Armenian.

Traveling Armenians have taken it to Persia, Azerbaijan, Turkey, the Middle East and as far as the Balkans, where derivatives are played. The instrument itself is simply a hollow pipe with eight finger holes on the upper side and one thumb hole on the bottom. It has a warm, soft, slightly nasal timbre, but it is capable of a wide-range of melodies and drone notes sustained for long periods of time. It is invariably played with the accompaniment of a second ‘dum duduk,’ which gives the music an energy and tonic atmosphere, changing the scale harmoniously with the principal duduk.

The duduk is built in three sizes, ranging from 11 to 16 inches. It requires a specific type of double reed, categorized as a split or slit-tube reed. As a musical instrument, it has not changed through the centuries, but the manner of playing it has been perfected and its sound has been improved. Its range is only one octave; however, it requires considerable skill to play, – its dynamics controlled by constantly adjusting the lips and fingers. The tuning is basically untempered and diatonic, though chromatic notes may be obtained by partially covering the finger holes.

The duduk repertoire consists of folk ballads as well as upbeat dance music. Composers have even written orchestral pieces for the instrument.

GGA represents professional musical instruments, that are recognized all over the world. The instruments are exclusively hand-made works. Feel the spirit of the orient music.

We Are Here To Assist You

We use cookies on our website to give you the most relevant experience by remembering your preferences and repeat visits. By clicking “Accept”, you consent to the use of ALL the cookies.
Cookie settingsACCEPT
Manage consent

This website uses cookies to improve your experience while you navigate through the website. Out of these, the cookies that are categorized as necessary are stored on your browser as they are essential for the working of basic functionalities of the website. We also use third-party cookies that help us analyze and understand how you use this website. These cookies will be stored in your browser only with your consent. You also have the option to opt-out of these cookies. But opting out of some of these cookies may affect your browsing experience.
Necessary Always Enabled

Any cookies that may not be particularly necessary for the website to function and is used specifically to collect user personal data via analytics, ads, other embedded contents are termed as non-necessary cookies. It is mandatory to procure user consent prior to running these cookies on your website.